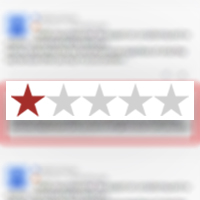 (This is an excerpt from my recently published book, The Lawyer Marketing Book.)

“Looking good is the best revenge.”

Premise
If you don’t have at least one negative online review, you will.  It’s the world we live in today and every firm needs a strategy for dealing with bad reviews.

Story
In late 2013, I was contacted by Tom, the managing partner of a 10-attorney litigation boutique, about helping his firm improve their overall marketing direction.  I was a couple years out of my sales career and it showed, because I made a cardinal error early in our meeting.  I showed Tom a negative review someone had posted about his firm on Google.

I spent the rest of the meeting trying to regain Tom’s attention.  The negative review absolutely consumed him.  He couldn’t understand why someone would possibly write a bad comment about his firm, and he was even more distraught that the person was allowed to do so anonymously.  I could have helped Tom and his firm, but we never got that far.

Online reviews have become part of our social fabric.  That have the potential for great good, and also great abuse.  But the reality for business owners is that they must learn how to manage the issue.  Below are key takeaways and tips for doing just that: